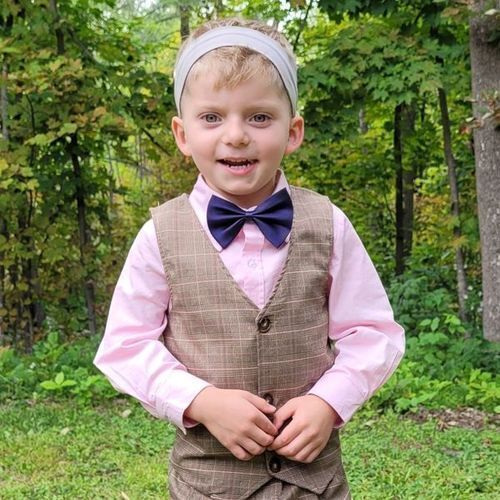 By Nicolas and Marisa Forte of Ontario, Canada.

Diego Forte is a fearless warrior who never gives up. Having poor balance, one of the three symptoms of Usher 1F, he is great at taking tumbles but an expert at getting back up.

On New Year’s Eve 2017, it was like any other. We had a nice family dinner and watched the ball drop. Shortly after, we were racing to the hospital as Diego wouldn't wait a minute later to be born. Luckily, we made it just in time and he made his appearance shortly after midnight on January 1st.

As a newborn, he failed his infant hearing tests, which was a red flag for us. Shortly after, he was diagnosed with profound hearing loss. Thankfully, we learned he was a great candidate for cochlear implants, and we agreed to have the surgery as he would be the only non-hearing person in our family. Although we were feeling some shock and disbelief, we forged on with further testing and later learned of his Usher 1F diagnosis. This confirmed that there will be a gradual loss of vision due to retinitis pigmentosa.

Regardless of his disability, he is a very dynamic boy with specific likes and a driven attitude. Diego loves swimming, gymnastics, arts and crafts, and outdoor play.  With the constant Covid-19 closures, he's often stuck at home as recreational programs are usually canceled.  In the race for a cure, Diego should not have to be robbed anymore from life’s wonders.

After feeling alone in this fight, we were relieved to learn there are many families affected by this brutal disease. It wasn't until our family joined the Usher 1F Collaborative that we were connected with detailed and scientific information and resources. We also learned of the amazing teams that are tirelessly working on finding the cure for Usher 1F.

Please help us spread awareness and donate! There is power in numbers, and the more people that can get involved, the better our chances are of finding a cure! Let's beat the clock and find that miracle!