Our University of Oregon Team

The workplace shutdowns brought about between March and May by the COVID pandemic also included research laboratories at the universities where our Usher 1F research labs are housed. While COVID-19 has impacted all of our research labs, one of our labs, the University of Oregon Institute of Neuroscience in Eugene, Oregon, was affected by yet a second disaster, the out-of-control wildfires on the west coast.

The COVID shutdown for our University of Oregon lab lasted from mid-March until late May. During that period, Monte Westerfield, PhD, and Jennifer Phillips, PhD, maintained only a skeleton crew who took care of the fish and monitored essential laboratory equipment, but, otherwise, all on-campus research stopped. Beginning in May, they were able to return to the laboratory in a very limited fashion with personal protective equipment (PPE) and extensive monitoring protocols. In June, their access expanded, and they currently are allowed to operate at between 50% to 75% occupancy.

Fortunately, the lab did not lose any animals or research supplies, which would have been catastrophic, either enormously expensive to replace in bulk or even irreplaceable. The largest impact was on long-term experiments that involve raising and breeding genetic stocks of zebrafish. Because the fish weren’t breeding for many weeks during the shutdown, they have been slow to return to pre-shutdown egg production.

The large Holiday Farm fire, which devastated the McKenzie River Valley, spread to within 30 miles of the group’s laboratory and homes. The tongue of the fire shown in red in the photo, was 2o miles away from the neighborhood that borders the university. According to Dr. Westerfield, “the smoke here was so bad the street lights were on during the day.”

While our Oregon team was not placed in evacuation mode, the smoke and ash were very hazardous. The air quality reached 500 on a scale that tops out at 500. The University and surrounding community were advised not to go outdoors without an N95 mask. Because University buildings are currently using 100% outside air to maximize air turnover during the COVID pandemic, this meant that it was also very hazardous to enter the laboratory. All staff except animal care workers stayed home. 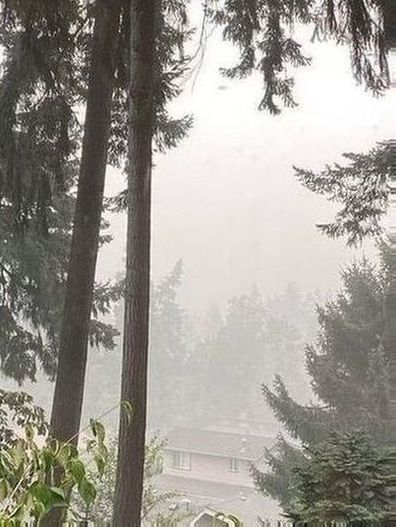 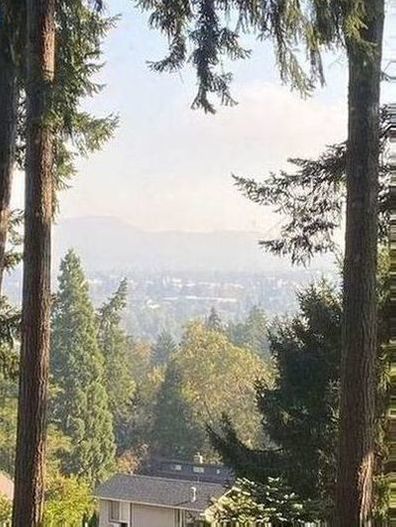 Dr. Phillips was faced not only with working from home but also with her mother’s memory care facility evacuating due to the fires. For five days in September, Dr. Phillips became her mother’s fulltime caregiver, squeezing in her research correspondence late at night and early in the morning while her mother was sleeping.

By late September, the team was back in the laboratory with outside air quality at 54, which is considered moderate. The cooler, wetter weather is helping to slow the fires, with the hope that the fall rains will completely extinguish them.

Despite the interruptions caused by COVID and the wildfires, Our wonderful University of Oregon team still made progress. During the months prior to the COVID shutdown, they analyzed the Usher 1F zebrafish, characterizing their hearing, balance, and vision in order to understand the different effects of the various types of mutations. Once they were able to return to their laboratory in June, they began tests of a potential small molecule therapy that might slow or stop retinal degeneration in the zebrafish models. By testing a number of different concentrations, they were able to identify an optimal treatment dose.

Our Oregon team’s objectives for 2021 include testing the optimal dosage of the small molecule in the Usher 1F zebrafish to evaluate whether there is improvement in their photoreceptor health. They are also planning a new set of studies that may lead to an antisense oligonucleotide (ASO) therapy. This type of therapy is in clinical trials for Usher 2A, and the team is developing a strategy that will allow them to test ASOs as a therapy for Usher 1F.

Our Usher 1F research team at the University of Oregon has demonstrated to us year after year their amazing ability to stretch a dollar. When telling Dr. Westerfield and Dr. Phillips of the launch of our Ten to Cure initiative, we asked them what a major sum of money would mean for Usher 1F research. They both said without hesitation that it would significantly enhance and speed their progress, enabling them to, according to Dr. Westerfield, “start more expensive studies that require specialized equipment and supplies that we currently cannot afford.” Dr. Phillips added, “In the five years of support we have received from the Usher 1F Collaborative, we have maximized our resources to develop effective and efficient tools for the study of USH1F but have been limited in the scope of what research questions we are able to pursue due to the prohibitive cost of high tech analyses as well as the limits of the small research staff. A bulk infusion of funds would dramatically expand the range and potential of our USH1F work.”